Experiments that take advantage of the properties of paramagnetic liquids are used to study Rayleigh-Taylor instability. A gravitationally unstable combination of a paramagnetic salt solution and a nonmagnetic solution is initially stabilized by a gradient of magnetic field that is produced by the contoured pole-caps of a large electromagnet. Rayleigh-Taylor instability originates with the rapid removal of current from the electromagnet, which results in the heavy liquid falling into the light liquid due to gravity. The mixing zone is visualized by back-lit photography and is recorded with a digital video camera. For visualization purposes, a blue-green dye is added to the magnetic fluid. The mixing rate of the two liquids is determined from an averaged dye concentration across the mixing layer by means of the Beer-Lambert law.

It is established in a number of previous studies that at late time the mixing width exhibits the self-similar behavior h=Agt^2. For the low Atwood number turbulent mixing generated by the RT instability, the proportionality coefficient is found to be within the range a=[0.03 - 0.08]. The primary goal of the present study is to corm the existence of the self-similar turbulent mixing. Depending on the experimental setup the proportionality coefficient is found to be  a=[0.022 - 0.065], which is consistent with the previous study. 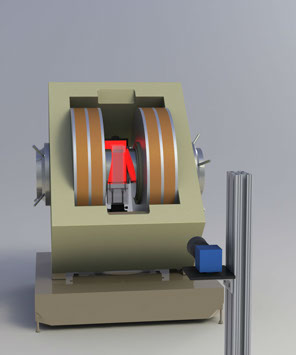 Rendering of the experimental setup. Test tank inside the magnet. 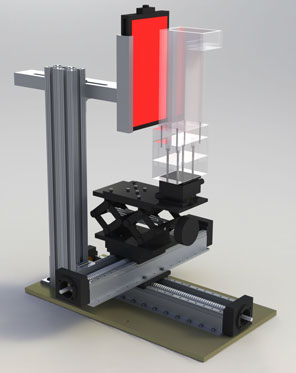 Rendering of tank holder before inserting it into electromagnet.

Aerospace and Mechanical Engineering Department at University of Arizona